In October 2016, to mark the 25th anniversary of their klaxon and sample driven debut, Altern 8 released a deluxe remastered edition of the seminal "Full On Mask Hysteria" in both vinyl and digital formats. Featuring all the tracks of the original plus exclusive new remixes and the excellent 2 Bad Mice remix of "Everybody", the vinyl release in particular is a real collectors item for fans of the original.

Classic tracks such as "Hypnotic St-8", "Frequency", "Activ 8", "Brutal-8-E" and the hoover classic "Move My Body" have never sounded better. Upon first listen it's clear that each track has been given the special treatment - the stereo separation has been enhanced and hi-hats and snares sound crisper than ever before. Whereas the quality of the 1992 vinyl pressing wasn't great this new version is fully recut and pressed loud for DJ play for the very first time.

For example, the squelching 303's that had previously been barely audible in "Hypnotic St-8" are now given a new space within the mix and really come into their own, panning from left to right. This tune features samples from one of the groups previous releases under their Nexus 21 moniker (the brilliant deep techno track "Self Hypnosis") and these segments really pop with a clarity not heard on the original.

The perennial crowdpleaser "Frequency" very much benefits from the remastering and now comes at you with even more intensity (if you can imagine such a thing!) Again, elements of the mix really come into their own via a tinkering with the stereo space, including a subtle change to the vocal sample that somehow manages to add a greater sense of urgency to the track.

One of my favourite tunes on FOMH was (and still is) "Armageddon", which I'm very pleased to say still sounds beautiful with it's hardcore stabs clearly enhanced and sounding fresher than ever. The crunching breakbeat even manages to deliver a bigger punch than before with it's crisp snares and ticking hi-hats now elevated in the mix.

Not only is the audio treated to a crisp remaster, but the album artwork has been given a makeover too. The vinyl version comes as a limited edition heavyweight release, in a stamped and numbered gatefold sleeve adorned with photos, artwork, and tales from their early 90's heyday.

A triple vinyl, limited edition, remastered release combined with original artwork, sleeve notes, and a history of the album makes for a very attractive package indeed. 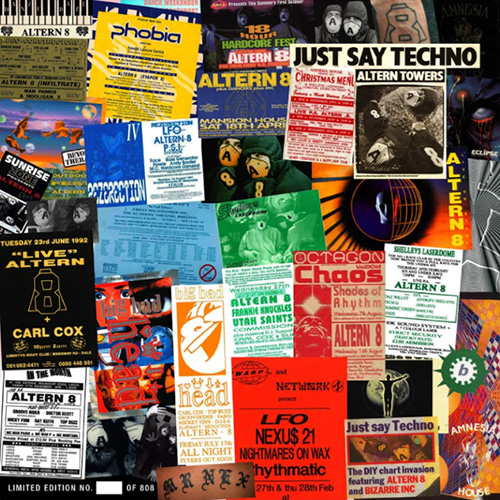 Alongside the original tracklist are a number of recent remixes by KiNK, Shadow Dancer and Luke Vibert as well as the 2 Bad Mice remix of the brilliant "Everybody". "Everybody" was the first vinyl I ever bought and packed an emotional punch not only in it's melancholic synths and strings but also as the last Altern 8 release before the band split.

Check out the full tracklisting here:

If you've not already read it, an ideal companion piece to the album is the autobiography of Mark Archer: "The Man Behind The Mask" (see the review here). The book is not only an account of his time in Altern 8 but is also a very personal tale describing his life before and after the band.

Way back in the early 90's there was a whole cross-section of my generation that rarely (if ever) saw the artists we admired featured in mainstream media. But for many of us acts like Altern 8 were our "rock stars" - these were the people that were out there every weekend killing it in live shows and putting out a form of music that had never been heard before.

For this reason I think it's important that albums such as "Full On Mask Hysteria" are given a new lease of life, for both old fans and new, and treated with the reverie that they deserve. "Full On Mask Hysteria" represents a moment in time; a snapshot of what was happening with British rave culture at a very pivotal point in dance music history.

One of the most important and iconic rave albums of all time finally gets the proper vinyl release it deserves.

Altern 8's "Full On Mask Hysteria (Remastered Edition)" can be bought in both vinyl and digital formats from Bandcamp.