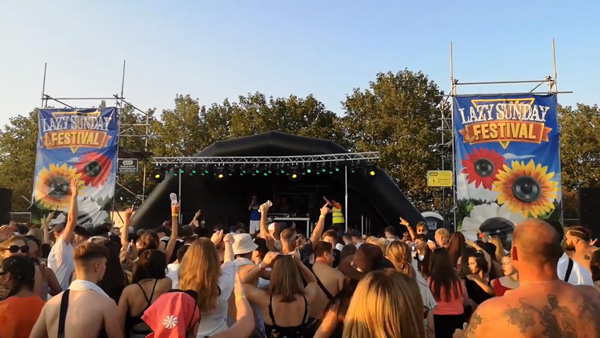 Let's face it, it wouldn't be British festival season without at least one massive downpour. And so, after a beautiful summer, with temperatures soaring and hosepipe bans in full effect, on the 26th of August the heavens opened and we were treated to the wettest day for months.

However... the hardcore scene is more than hardcore in name only, and yet again the Lazy Sunday crowd rose to the occasion and ploughed on regardless. As Alfred Wainwright once said, "there's no such thing as bad weather, only unsuitable clothing"!

Building on the huge success of last years festival the site for 2018 was now significantly larger, with greater food options and a kids area at least twice the size of 2017. To top it all off the this year's line-up was exceptional, with an already excellent roster of DJ's being punctuated with live PA's from the likes of Liquid, Shades of Rhythm, Mix Factory featuring Rachel Wallace and Beat Jugglers.

Opening this year's festival, Backlash was the first to try out the new sound system. While early punters were beginning to make it through the gates the bass from Awesome 3's "Don't Go" could be felt pounding in the chest way back in the car park! DJ Gap & Klass MC followed on with a set that took in rave breaks and hardcore and ended with a selection of jungle classics that really got the crowd moving. While early punters got it on to "Valley of the Shadows" new arrivals made themselves at home, setting up gazebos, tables and chairs around the periphery of the site - in it for the long haul regardless of the ominous black clouds. 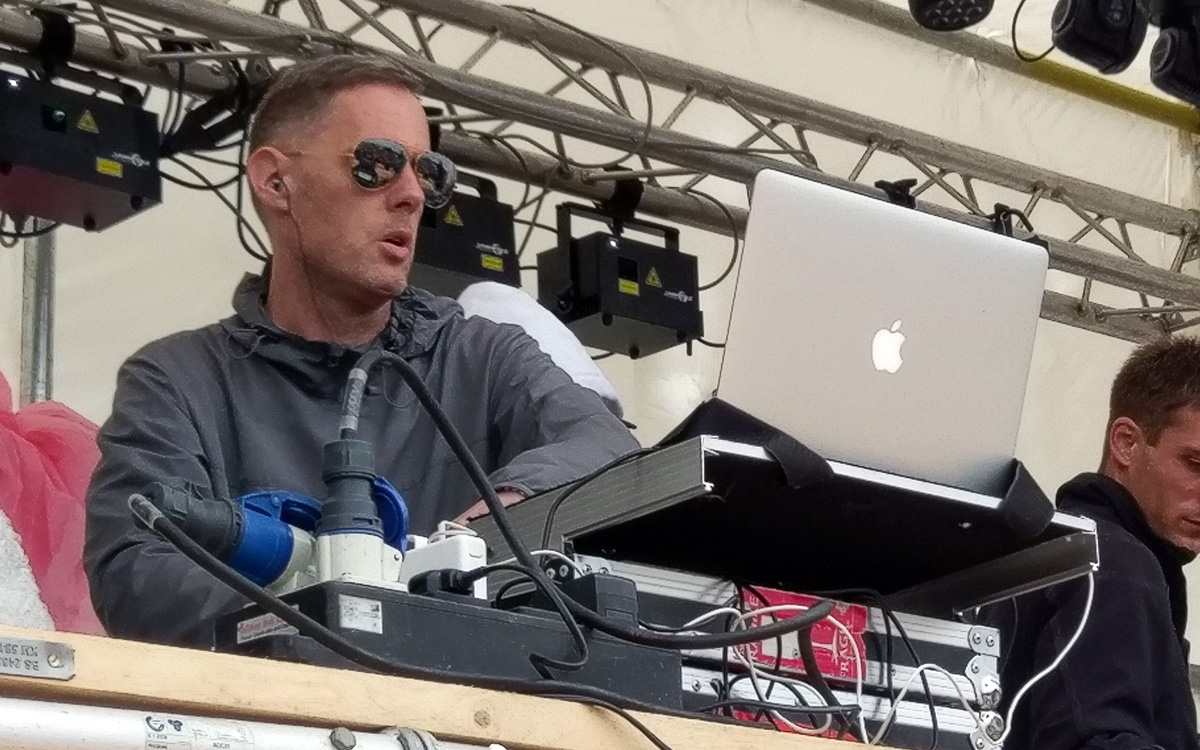 This years festival, much like last year, had a real sense of community, with groups of people clearly reuniting after spending a week together partying in the sun at Unity or SOS. When Jeff Booz took to the stage the support from the crowd was fantastic - when he played "Ravin' I'm Ravin'" for one brief moment you could totally forget you were dancing in a sodden field in Bedfordshire! The Lazy Sunday crowd are nothing if not loyal to the scene (tee shirts adorning #Oldskool, Music Mondays or Vibena Jungle were numerous) while the support for the event, come rain or shine, was admirable. It was during Dill's early-house set that the rain really peaked but the punters danced on regardless; the weather just serving to enhance the rave scene's legacy of unity, whether dancing defiantly or sheltering in a shared gazebo.

Speaking of rave's legacy, the next DJ to play was introduced by "Fat Controller" Jay Folly as a guy that "could potentially be the fruit of our loins"! Winner of "Best Breakthrough DJ" at this year's We Love Jungle awards, Tom Lavery played an outstanding 88-91 set opening with "Papua New Guinea" and "Voodoo Ray". Speaking backstage, a humble and self-deprecating Lavery told me he used to bunk off school to buy hardcore and jungle records before he began producing himself. His own label - Sub Code Records - is responsible for putting out some real jungle bangers and it would be good to one day see him return to Lazy Sunday to play a set of old skool and contemporary jungle.

The first PA to take to the stage were the five-piece live-dance collective Beat Jugglers who - joined on-stage by two additional dancers - put on an upbeat, energetic performance of their original tunes such as "Raves Like This" and "Vibezin". Their impressive live show went down particularly well with the crowd and they clearly bring something new to the table. I'll most certainly be keeping an eye on the band's future releases and look forward to seeing them play out again. 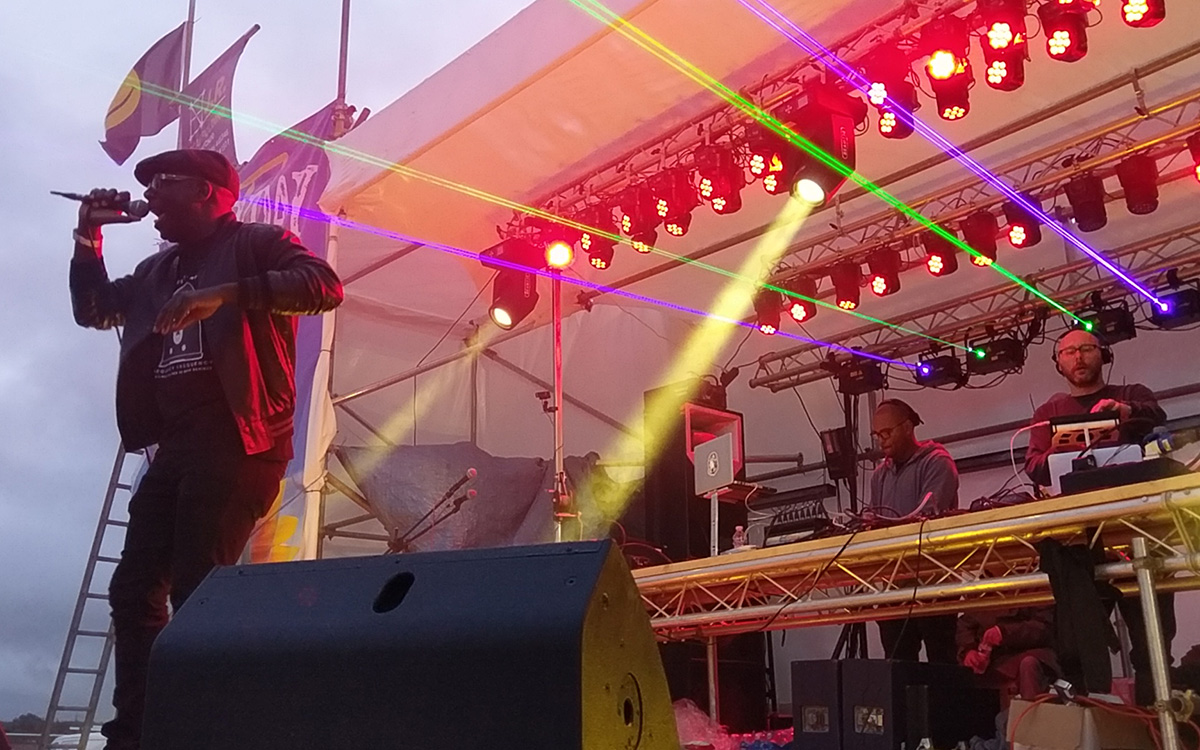 For me, it was the PA aspect that added a whole new dimension to this years festival. The opportunity to see producers such as Eamon Downes (Liquid), Mark XTC (Mix Factory/Family Foundation) and Shades of Rhythm perform the tunes that not only shaped the scene you love, but also soundtracked some of the most formative years of your life, was incredible. As down to earth as Eamon Downes is there was a real fanboy glee when watching him play the anthemic "Sweet Harmony" and later feeling the sub-bass of "Liquid is Liquid" resonate in my chest. Mark XTC and Rachel Wallace also put on a fantastic performance together and the interaction on-stage between Wallace and MC Strict was uplifting to say the least - it really helps when you can see the act having as much fun as you are. Shades of Rhythm later took to the stage to perform "Sound of Eden" and "Sweet Sensation" to a more than up-for-it gathering, and when they played the opening bars of "Ecstacy" things completely kicked off with vocalist Rayan Gee really working the crowd.

Despite a wet start the rain was coming to an end by early evening and Lazy Sunday regulars 2 Bad Mice, Cosmo & Dibs and Barrington were able to play out to a packed crowd now bolstered by the arrival of evening-only festival goers. All DJ's were on point but special mention this year has to go to MC Strict who didn't rest up the whole day and did an outstanding job of keeping the crowd jumping.

Event organiser Fat Controller took to the decks when darkness fell and gave the crowd a rare treat in the form of Beat Jugglers' Mad Mick (and original Guru Josh Project saxophonist) playing live to a remix of Guru Josh's "Infinity" while fireworks lit up the sky - a really special moment. As with last year, Uncle Dugs and Billy Bunter (albeit a much trimmer version than Lazy Sunday 2017!) took over for the final two hours and between them touched upon jungle, old skool, rave breaks and reggae, leaving the crowd crying out for just one more tune by the time everything had to come to a close. 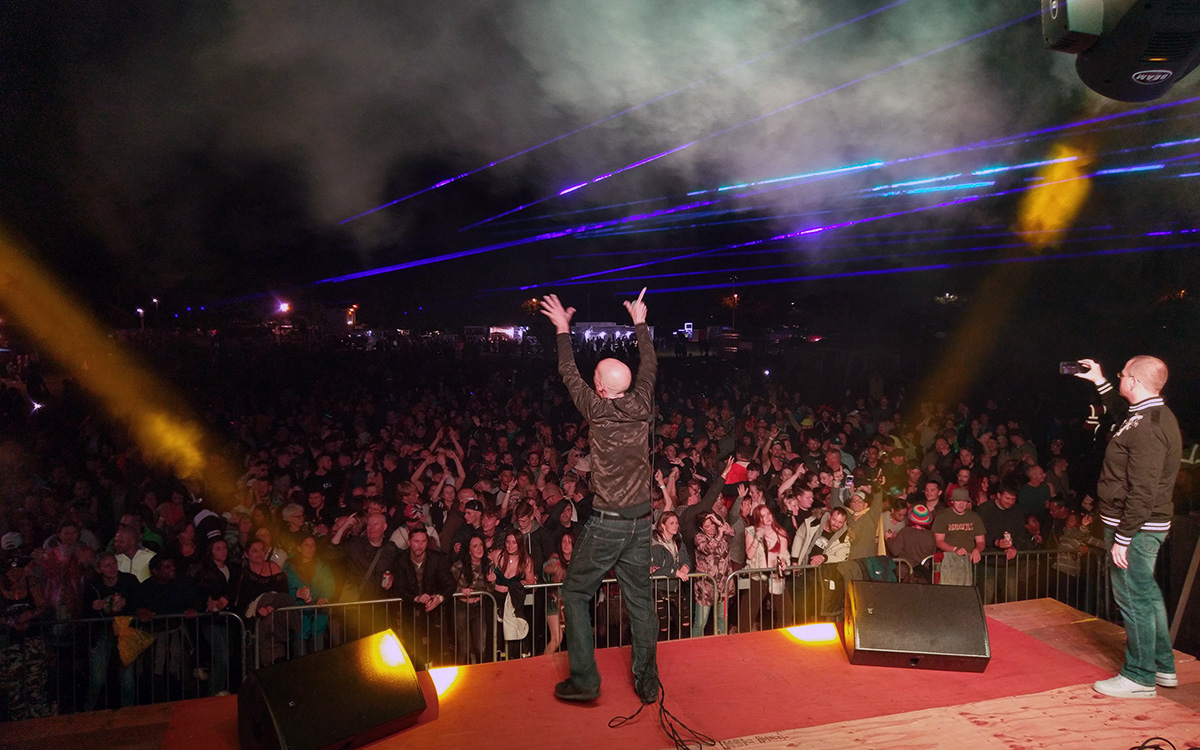 Lesser events could have been a wash out but thanks to a top notch line-up, and one of the most loyal and up-for-it crowds you could hope for, this year's Lazy Sunday was, without a doubt, a total triumph packed with memorable moments. 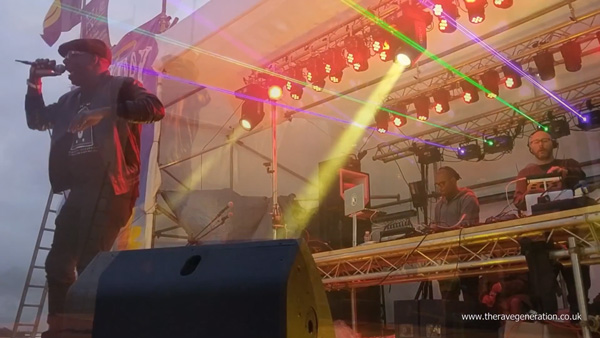 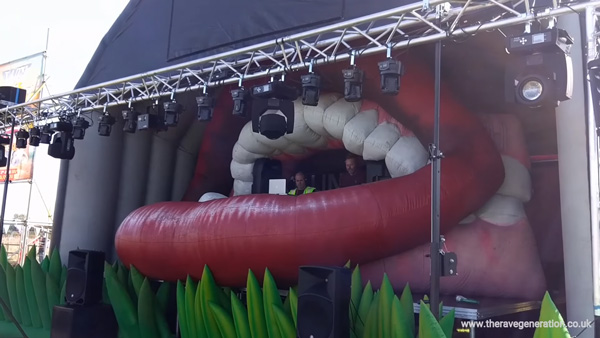